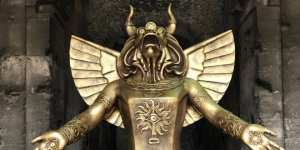 I must begin with a couple of disclaimers.  First, this homily is not an exegesis of 1 Corinthians 10; it is not the way I would teach this text in context.  Rather, it is a reflection on the text based on the events of recents days, weeks, and months.  Second, though I am a priest resident in the Anglican Diocese of the South, I do not speak for my diocese.  Though I am an assisting priest at Apostles Anglican Church, I do not speak for my parish.  These words are mine, though I pray I have listened well to the Spirit in preparing them.  I offer them this morning:

I came of age in the modern world, in a culture that naively embraced the promise of unlimited human potential and near certain progress toward Utopia — progress led by scientists and engineers, by philosopher-statesmen, by daring men and women.  That age had its successes, to be fair.  It gave us penicillin and Velcro, and it put a man on the moon.  It also gave us two world wars and countless minor ones, genocides too brutal to imagine, a nuclear stockpile sufficient to destroy the world, and air we often can’t breathe and water we can’t drink.  That world is mostly dead, though the current pandemic has revived it a bit as we look to medical researchers to discover a vaccine and put a stopper in death.

The world now is post-modern, post many things that we once trusted.  This is the age of deconstruction:  leery of any story but one’s personal story, wary of any authority but one’s own freedom, suspicious of any truth but one’s own perceptions.  I live in it, but I am not of it.

Paul’s world was pre-modern:  a spiritual world, a world of gods and goddesses who seemed to care little how people actually lived provided the people offered the proper sacrifices.  It was cultural religion:  go to the temple, offer the appointed sacrifice, feast with family and friends, and then get on about your business until next time.  The Corinthian Christians lived in this world.  Paul did not want them to be of it.

Idols abounded in Corinth.  Likely, many of the Christians there once worshipped idols; likely many among their friends and families still did.  And, that was a problem.  The culture, the age, drew the Christians back into idol worship, not as a matter of conviction, but of social norms.  Can we feast in the pagan temples?  Can we eat meat offered to idols?  These were real questions, important questions.  Can we engage with our society — with our age — on its own terms while holding our Christian faith privately?

Idols:  that’s the issue.  On one hand, Paul insists that idols are nothing at all.  Here he echoes Psalm 115:

4 Their idols are silver and gold,

the work of human hands.

5  They have mouths, but do not speak;

eyes, but do not see.

noses, but do not smell.

feet, but do not walk;

and they do not make a sound in their throat.

Stone, wood, gold, silver:  these things can’t hurt you.  But, it’s not that simple.  The real world is not just material; it is spiritual.  And behind these material idols lie demons.  To share in the feast of idols is to lift the cup to demons.  And so Paul writes:

Every age has its idols, with demons lurking behind them all.  The modern age didn’t believe that, and the post-modern age doesn’t believe that now.  But, it’s true, and there are tell-tale signs, if you know what to look for.  Division.  Wherever you see division, be on the lookout for idols and demons.  It was that way in Corinth and it’s that way now.  That’s what demons do; they scatter, they divide, they promote discord and distrust and chaos.  And, we are not immune.

Some Christians say, “Black Lives Matter,” while others insist on saying “All Lives Matter.”  The demons care not one whit which you say as long as you also mutter “Marxist” or “racist” under your breath or virtue signal or shame a sister or brother on Facebook, because to the demons “No Lives Matter.”  One agenda is as useful as another if only the demons can use it to sow division.  They seek only to divide and destroy:  black lives, white lives, brown lives — all lives.  I do not want you to be participants with demons.

Some Christians tie ropes to monuments and statues and cry, “Pull them down,” while others lament the wanton destruction of history and culture.  “At least put them in museums,” they say.  The demons care not one whit which you do as long as you take your eyes off the cross, off the monument of the Father’s love for all the world, off the monument of the Son’s self-sacrifice for Yankees and Rebels, for slaves and masters, for all damned sinners, which is to say for all of us.  I do not want you to be participants with demons.

Some Christians wear masks to bed and in the shower while others would rather die than don a mask in a public place.  The demons care not one whit whether you breathe your own bad breath behind a mask or share the Covid virus with all those who ignore social distancing guidelines as long as they can veil the image of God in which you — and your brothers and sisters — were created and redeemed, as long as you can no longer see the image of Christ in the sister or brother who either does or does not wear a mask, unlike you.  I do not want you to be participants with demons.

Some Christians want to Make America Great Again — Again, while others insist that can’t happen unless Donald Trump becomes a one-term president.  The demons care not one whit whom you vote for as long as you are a staunch Republican-Christian or a yellow dog Democratic-Christian with Christian firmly in second place behind your party affiliation.  As long as they can convince you that only your party can and will usher in the Kingdom of God in these United States of America, the demons are delighted to pave the road to hell for Democrats and Republican alike — and, yes, even for Libertarians, Socialists, and Independents, too.  I do not want you to be participants with demons.

You see, Christians in this age and in every age are still forced to ask the same questions:

Can we feast in the pagan temples?  Can we eat meat offered to idols?  Can we engage with our society — with our age — on its own terms while holding our Christian faith privately?

And Paul’s answer is still the same:  I do not want you to be participants with demons.

Let’s be clear.  None of the things I mentioned are off limits for Christians:  the push for biblical justice, the right honoring of history and culture, the proper concern for one another in time of disease, the participation in politics and governance.  Each is a matter for Christian discernment.  But each of these also has the potential to become an idol, and, when it does, be clear that demons will use it to divide and destroy.  When you see signs of division, be alert.

How do we exorcise the demons?  Paul is clear about this, too.

14 Therefore, my beloved, flee from idolatry. 15 I speak as to sensible people; judge for yourselves what I say. 16 The cup of blessing that we bless, is it not a participation in the blood of Christ? The bread that we break, is it not a participation in the body of Christ? 17 Because there is one bread, we who are many are one body, for we all partake of the one bread (1 Corinthians 10:14-17).

Flee from the table of demons and come to the Table of the Lord.  Flee from division and cling to unity.  There is one bread and we who are many are one body, because we all partake of the one bread:  black and white, Republicans and Democrats, iconoclasts and iconodules, mask wearers and mask haters — we are one body in Christ.  The demons divide.  The Spirit brings together.  I do not want you to be participants with demons.  Amen.

I am a husband, father, retired teacher, lover of books and music and coffee and, as of 17 May 2015, by the grace of God and the will of his Church, an Anglican priest in the Anglican Church in North America, Anglican Diocese of the South. I serve as assisting priest at Apostles Anglican Church in Knoxville, TN, and as Canon Theologian for the Anglican Diocese of the South.
View all posts by johnaroop →
This entry was posted in Uncategorized. Bookmark the permalink.