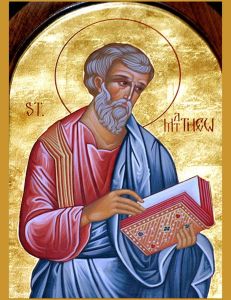 Lord Jesus, you called Matthew from collecting taxes to become your apostle and evangelist:  Grant us the grace to forsake all covetous desires and inordinate love of riches, that we may follow you as he did and proclaim to the world around us the good news of your salvation; for with the Father and the Holy Spirit you live and reign, one God, now and for ever.  Amen.

Have you ever known someone who jumps on every bandwagon, who embraces every new fad that comes along, who always acts quickly and apparently without deep thought — a person with little concept of stability? “This is the greatest thing,” he/she says, and you’re thinking, “Yeah, the greatest thing since the last greatest thing you found and before the next greatest thing you’ll move on to.”  Change:  in our modern, first-world setting, we can do change; change is easy because we have expansive options.  Don’t like your boss?  Quit:  there are other jobs out there.  Tired of your wife or husband?  Try a no-fault divorce — irreconcilable differences or some such thing.  Disappointed in your church?  Leave.  There’s a church on every corner; you might even want to try a totally different denomination or even a new faith to see what it has on offer.

This ability to change and to choose — at least readily and easily — is relatively new to the human experience, yet another mixed blessing of the Enlightenment.  Even now it’s limited in scope and extent; the developing world knows little of it, nor do those burdened under totalitarian regimes.  It is primarily a Western, first world, democratic phenomenon. It seems natural to us, a self-evident truth: the right to life, liberty, and the pursuit of happiness.

Perhaps this is even the lens through which we read the calling of Matthew:

Jesus’ bandwagon rolls by and Matthew jumps on it.  Is that it?  Is it as simple as that?  “I’ll try this for awhile, see what Jesus has to offer.  If he’s not the real deal, I can always find another job or maybe even go back to collecting taxes.”  Hardly.  Not in the Roman world Matthew inhabited.  This was the end of life as he knew it, and there was no going back.  Options did not abound for someone like Matthew.  Choosing was not something a tax collector did, and change was not really a viable option.  And yet Matthew did choose; he chose Jesus.  Matthew did change, did exchange the economic stability of the tax booth for the vagaries of discipleship.  That’s no small thing, and we are left wondering why he did it.  I don’t intent to play biblical psychologist and try to unearth Matthew’s emotional state or psychic motivations.  But his own writing — its structure and organization — does give us some important insight to this change.

Chapter 8 focuses on Jesus’ power to heal and on his authority to command nature.  It begins with a leper:

Matthew 8:1–3 (ESV): When he came down from the mountain, great crowds followed him. 2 And behold, a leper came to him and knelt before him, saying, “Lord, if you will, you can make me clean.” 3 And Jesus stretched out his hand and touched him, saying, “I will; be clean.” And immediately his leprosy was cleansed.

As a physical condition, leprosy was devastating.  But — you know this — it was also devastating from social and spiritual perspectives.  A leper was an outcast from society and could not enter the Temple to worship.  Notice what the leper says to Jesus:  “Lord, if you will, you can make me clean.”  I don’t want to make more of this than is warranted, but the leper did not ask to be healed; he asked to be made clean, which would allow him to go home, allow him to go to Temple.  Of course that required healing, but it was being made whole socially and spiritually that he longed for.  Is Matthew telling us something here?  Is he explaining his own motivation?  As a tax collector he was a social pariah in his community.  He could go to Temple, but his welcome was uncertain.  Remember the Pharisee in the Temple treasury who thanked God aloud that he was not like this tax collector.

Then, still in chapter 8, comes the tale of the Centurion who asks Jesus to heal his servant:

Matthew 8:5–12 (ESV): When he had entered Capernaum, a centurion came forward to him, appealing to him, 6 “Lord, my servant is lying paralyzed at home, suffering terribly.” 7 And he said to him, “I will come and heal him.” 8 But the centurion replied, “Lord, I am not worthy to have you come under my roof, but only say the word, and my servant will be healed. 9 For I too am a man under authority, with soldiers under me. And I say to one, ‘Go,’ and he goes, and to another, ‘Come,’ and he comes, and to my servant, ‘Do this,’ and he does it.” 10 When Jesus heard this, he marveled and said to those who followed him, “Truly, I tell you, with no one in Israel have I found such faith. 11 I tell you, many will come from east and west and recline at table with Abraham, Isaac, and Jacob in the kingdom of heaven, 12 while the sons of the kingdom will be thrown into the outer darkness. In that place there will be weeping and gnashing of teeth.”

Once again, this is the story of an outsider who is brought inside through his faith and the Lord’s mercy, an outsider whose faith exceeds that of Israel.  And notice the parable Jesus employs:  the outsider is invited to feast at table with Abraham, Isaac, and Jacob in the kingdom, while the insiders are thrown out into the darkness.  Hold that parable in mind.

In chapter 9, some people bring a bed-ridden paralytic to Jesus.  Before anyone speaks, Jesus takes the initiative and says, “Take heart, my son; your sins are forgiven.”  Outrageous, blasphemous unless true.

Matthew 9:9 (ESV): As Jesus passed on from there [from the healing of the paralytic], he saw a man called Matthew sitting at the tax booth, and he said to him, “Follow me.” And he rose and followed him.

In structuring his Gospel this way, I wonder if Matthew is trying to explain himself to his readers.  I wonder if he is trying to tell us that his decision to follow Jesus wasn’t impetuous or foolhardy.  I wonder is he is saying something along these lines:

I wanted to be cleansed like the leper, to be part of a community again, to be able to worship again.

I wanted to be welcomed at table in the kingdom of God, just like that foreigner, the Centurion.

I wanted to be forgiven just like the paralytic.

Now, if I read the Gospel right, here’s a clue.  What’s the very first thing Matthew did upon following Jesus?  He hosted a banquet.  He sat down at table with Jesus in the kingdom of God, as someone who had heard the truth, as someone who had been cleansed and welcomed into community, as someone whose sins had been forgiven, as an outsider welcomed to Abraham’s table.

Matthew 9:10–13 (ESV): And as Jesus reclined at table in the house, behold, many tax collectors and sinners came and were reclining with Jesus and his disciples. 11 And when the Pharisees saw this, they said to his disciples, “Why does your teacher eat with tax collectors and sinners?” 12 But when he heard it, he said, “Those who are well have no need of a physician, but those who are sick. 13 Go and learn what this means: ‘I desire mercy, and not sacrifice.’ For I came not to call the righteous, but sinners.”

Looking to sit at table in the kingdom of God?  Follow Jesus.

I am a husband, father, retired teacher, lover of books and music and coffee and, as of 17 May 2015, by the grace of God and the will of his Church, an Anglican priest in the Anglican Church in North America, Anglican Diocese of the South. I serve as assisting priest at Apostles Anglican Church in Knoxville, TN.
View all posts by johnaroop →
This entry was posted in Uncategorized. Bookmark the permalink.